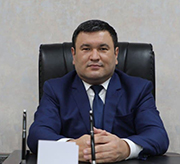 2006-2010 Chief Specialist, Deputy Head of the Department of Foreign Economic Relations and Attracting Investments of the National Holding Company "Uzbekneftegaz"

2012-2014 Deputy Minister of Economy of the Republic of Uzbekistan for economic modernization, development of infrastructure for industry and production

2017-2018 Head of the Information and Analytical Department for Geology, Fuel and Energy Complex, Chemical, Petrochemical Metallurgical Industry of the Cabinet of Ministers of the Republic of Uzbekistan

2019-2020. First Deputy Minister of Energy of the Republic of Uzbekistan

2020-present Chairman of the Board of JSC "Uzkimyosanoat".

The main functional responsibilities of the General Director of the Agency "Uzatom" are: